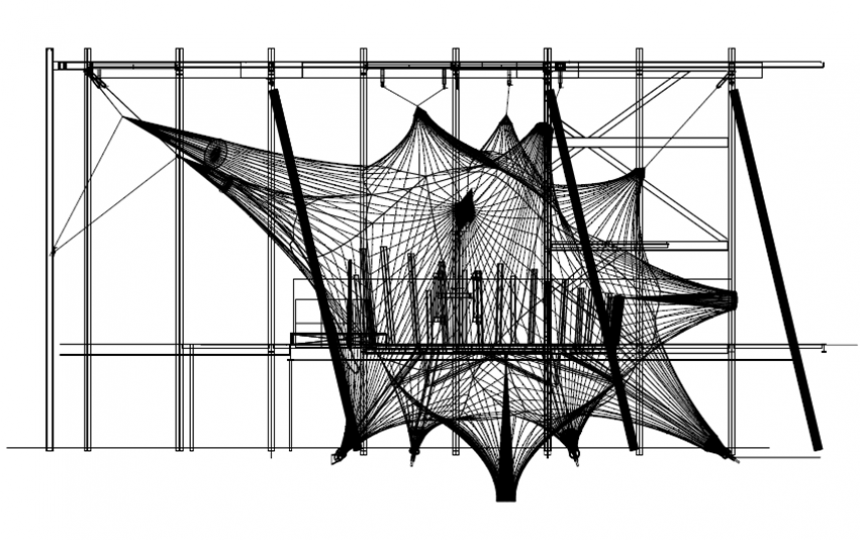 Written by Alex Heslop on 5th March 2009 in Design

Canopies fall into two main types, those that transfer tensile loads into adjoining structures and those containing the tensile loads within their own frame. The first type may generate large lateral loads which may result in the need for additional in existing structures.

Likewise a typical lightweight canopy with masts and cable tie backs to the ground level will generally need large concrete foundations or screw anchors to resist the tensile loads. As part of the preliminary design process a provisional load analysis derived from a computer modal will give typical loads directions and size of the design loads.

The boundary of the membrane into two categories:

Curved/scalloped edge:  This generally consists of a cable slid through a pocket on the edge of the membrane. In larger canopies webbing belts are added parallel to the edge to take out the shear loads. An alternative detail used for PTFE canopies is to an exposed cable connected to the clamped edge of the membrane by series of stainless steel link plates.

Straight edge: The membrane would have a bead/keder edge formed by sealing a flexible PVC rod in a small pocket. This can then be trapped behind an aluminium clamp plate bolted directly onto the structural steel work or slid into an aluminium luff track extrusion.

Canopies can be tensioned by hydraulically jacking the mast with the base being housed in a sand pot or the mast can be extended with a telescopic section.

Corners can be pulled out with rigging screws, U bolts or by the shortening the perimeter mast tie back cables.

Individual scallops can be tensioned by shortening the edge cable where the swaged studs connect onto the membrane plate.

A very common detail is to pull panels into parallel luff tracks and tension by drawing out the corner plate that slides inside the luff track.

As Technical Design Consultant, Alex brings to the table a wealth of design & engineering expertise.